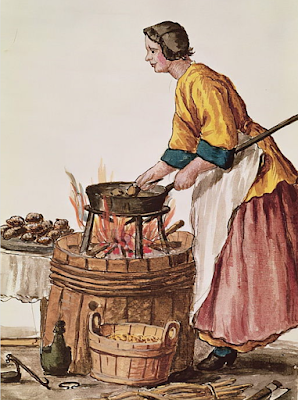 A BATCH OF DOUGHNUTS
“Of course this isn’t real camping,” said Dick as he munched his fifth sandwich.
“It’s a mighty good lunch, though,” answered Chub. “And I can’t wait to get to those crullers—I mean doughnuts. What’s the difference, anyway, Roy?”
“A cruller is a doughnut with the hole left out.”
“Get out! What we call crullers are built just like these, with a hole in the middle.”
“Some folks call them fried-cakes,” offered Dick.
“Well, it doesn’t matter what they’re called,” said Chub, cheerfully; “they look fine and Harry has made lots of them. And, say, fellows, look at the sugar on them! Let’s hurry and reach the dessert.”
Dick had brought Harry and her lunch basket across to the island and now they were seated on the grass in front of the tent with the contents of the basket spread before them. There were two kinds of sandwiches, hard-boiled eggs, bananas and doughnuts. There was also clear, cold water from the river served from a tin coffee-pot for want of anything more suitable and drunk from tin cups.[64] Strange to say, the enthusiasm over the doughnuts brought no response from Harry. In fact, as the meal progressed and the time for the dessert drew near, she exhibited well-defined symptoms of uneasiness, and when, finally, Chub, unable to hold off any longer, seized the first doughnut and bit into it, she forgot the sandwich she was struggling with and watched him anxiously.
“Um-m!” said Chub rapturously. Then he repeated the remark, but with a note of doubt. Then he shot a puzzled look at Harry, who dropped her eyes quickly and devoured her sandwich so hurriedly that she choked and had to be slapped on the back by Dick. During this diversion Chub glanced frowningly at the doughnut in his hand, dropped it surreptitiously into his pocket and took a banana. When Harry looked again the doughnut had disappeared and her face expressed relief. Then Dick reached for one.
“How are Harry’s doughnuts, Chub?” he asked.
“Great!” said Chub with extraordinary, even suspicious, enthusiasm.
“Well, they certainly look fine,” replied Dick, setting his teeth into one.
“They surely do,” agreed Roy, following his example. “Aren’t you going to have one, Harry?”
“Please,” said Harry, her hand stretched toward the plate and her gaze on Dick.
Dick was munching his first mouthful somewhat gingerly and viewing the doughnut with surprise. There was a moment of silence. Then, “I say, Harry,” blurted Dick, “what the dickens did you put into these things?”
“Why?” she faltered.
“Don’t they taste sort of funny?” he asked. “How’s yours, Roy?”
“All right,” replied Roy, eating doggedly, his eyes fixed on space as though he were trying to concentrate all efforts on the task. Dick laid his doughnut aside and picked up another.
“Maybe that one isn’t a fair sample,” he said hopefully. “I thought it tasted of—of—I don’t know just what.”
But he appeared to derive small pleasure from his second one and with a sigh of disappointment he laid it down on his knee with a fine simulation of carelessness and took a banana. Then:
“Hello,” he said, “aren’t you eating any doughnuts, Chub?”
“Me? Oh, yes, I had one,” answered Chub. “Fine, aren’t they?”
“Great,” answered Dick warmly.
“Toss me a banana, will you, Dick?” This from Roy, who, having caused the last of his doughnut to disappear, was still swallowing convulsively. “I ate so many sandwiches,” he added, in an apologetic tone, “that I can’t do justice to the doughnuts. Doughnuts are awfully filling things, aren’t they?”
“They certainly are,” agreed Dick and Chub together.
Vill du veta hur det går så får du gå till fadedpage.