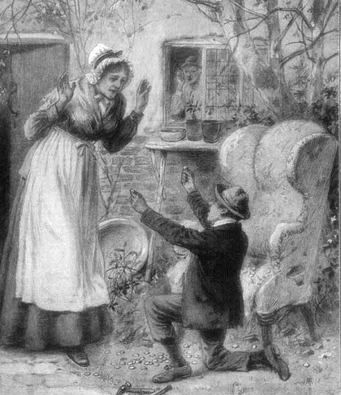 On a cold winter's afternoon, in the year 1806, the little crowd that had been attending a sale of furniture at the chief auctioneer's in Wolverhampton was slowly melting away, for the few lots still left to be sold mostly consisted of worn-out saucepans, broken towel-rails, and some shabby chairs, and such-like worthless articles.

Very poor people, however, cannot be too fastidious, and a few buyers still remained who were glad to bid for such things, and amongst these people was a respectable-looking widow, in threadbare mourning, with a boy of about thirteen years old by her side.

'Lot 213!' said the auctioneer, with a yawn; for the excitement of the sale was over, and he did not waste professional jokes except on well-to-do hearers. 'Rosewood armchair, upholstered in best wool damask! Now, then, what offers?'

His assistant meanwhile had hoisted on to the table the very shabbiest chair that had ever occupied so prominent a position! No doubt it might once have been a good piece of furniture, but now the rosewood was so encrusted with dirt that it required much scrutiny to say what the wood really was; and, as for the 'best wool damask,' that must have existed only in the auctioneer's imagination, for the chair looked as if it were upholstered in a ragged, colourless canvas, with the stuffing sticking through in numberless places.

Some of the little audience laughed and jeered as the chair was placed before them, and one man said, derisively, that 'it wasn't worth breaking up for firewood.'

The little widow's eyes, however, brightened, and she whispered to the boy, 'That's the chair I told you of. I saw it yesterday. I could clean it up, and make it comfortable for your grandfather. I can't bear to see him sitting on that hard chair of his, with his rheumatism and all. But I'm afraid it will go for more than I have.' And she clutched the leather bag, with its solitary half-crown, more firmly in her hand.

'I could settle it, if only I get it,' said the widow, anxiously, still looking at the chair.

'Now! What offers?' repeated the auctioneer, looking impatiently round. 'Come, make a bid! A good rosewood chair, upholstered in damask.'

There was silence. No one seemed to want such a wretched piece of furniture, except the widow, who longed for it so earnestly that the power of speech seemed to go from her.

'George,' she gasped, as she pulled her boy's sleeve, 'say you'll give a shilling. I can't make him hear me.'

'A shilling!' shouted out the boy, and the auctioneer turned in his direction at once.

'A shilling for a rosewood chair, upholstered in best damask!' he said, in a voice of scorn. 'And this in the respectable city of Wolverhampton!'

The spectators laughed, but no one bid any further sum, so the auctioneer, who wanted to get home to his supper, banged his hammer on the table, and to her surprise and delight the widow found that the chair was hers.

With her boy's help she got the chair home, and cheered her invalid father by telling him 'his old bones should ache no longer. She would have him in an easy-chair by the following day.'

She was up at daybreak, and immediately after their frugal breakfast she dragged the chair into the yard, and began ripping up the fusty old lining.

'Let me do that, mother. I can rip finely,' said George, taking the knife out of her hand, for there is a certain joy in tearing and cutting that appeals to a boy.

'Very well,' said his mother, 'then I will get a pail of warm water, and we will scrub the rosewood, and get all this black dirt off it; and when that's done I'll begin the upholstering. I'm going to cover it with my old red cloak. It will be fine and soft for your grandfather, and I don't wear colours now, so that I can spare the cloak. But, first of all, I will put Grandfather in the window-seat, so that he can see all we are doing. It will amuse him; his life is dull enough, poor dear old man.'

She went indoors, and George continued the ripping, enjoying the clouds of dust he raised in the process.

The little woman had just settled her father comfortably on the wooden settle, where he could look out of the window and see all that went on in the yard, when they were startled by a cry from George.

'He has cut himself!' said the poor woman, turning deadly pale, as she flew out into the yard.

But George was unhurt, though he looked dazed and half stupefied.

'Look here, Mother,' he said, pointing down to the ground, 'this chair was full of gold pieces. No wonder it was so heavy to drag home!'

'Gold pieces! Oh, no!' she said, shaking her head. 'You must have made a mistake, my boy.'

'Look at them!' said George, stooping down and picking up a handful of guineas from the mass of dust and dirt and horsehair that was strewn on the floor of the yard. 'They're guineas right enough; they came pouring out like water when I got to the middle of the chair.'

'They look like guineas,' said the poor woman, trembling with anxiety. 'Oh, George, if they should be, and if they are rightfully ours, then Father could get to Bath and be cured, and you could be apprenticed to a cabinet-maker, like your poor father before you.'

'They are guineas,' said George, stoutly. 'Let's show them to Grandfather—he will know; and if they are—and I know they are'—he repeated, 'some of the money must be spent on you, Mother; I won't have it all go to apprentice me. If that ever comes off, you must have a new gown and cloak to sign my articles in,' and George got up from the dirty ground and gave his mother a hearty hug.

Grandfather gave his verdict: the guineas were real, and had the effigy of George I. stamped on them, and there were just a hundred of them, all told.

Of course, the news of the widow's lucky find was soon known, and the auctioneer claimed the money, but the clergyman of the parish supported the widow's claim, and though the auctioneer went to law about it, he lost his case and had to pay the costs.

Later on in the year a happy family party went to a solicitor's office to sign George's indentures.

Grandfather was there, erect and well, for the Bath waters had done wonders for him. His widowed daughter hung on his arm in a fine new dress and cloak, and George, looking very important at the thought of being apprenticed to the first cabinet-maker in Wolverhampton, had everything on new from top to toe, and all this was the outcome of the purchase (for a shilling) of 'the old rosewood armchair.'