It is not Christianity, but priestcraft that
has subjected woman as we find her. 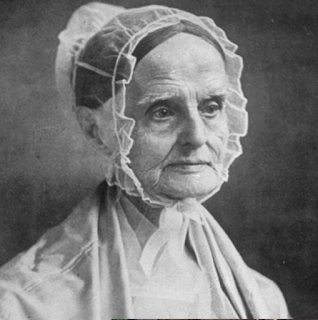 Any great change must expect opposition, because it shakes the very foundation of privilege.

The cause of Peace has had my share of efforts, taking the ultra non-resistance ground — that a Christian cannot consistently uphold, and actively support, a government based on the sword, or whose ultimate resort is to the destroying weapons.

In the true married relationship, the independence of husband and wife will be equal, their dependence mutual, and their obligations reciprocal.

The world has never yet seen a truly great and virtuous nation, because in the degradation of women, the very fountains of life are poisoned at their source.

Learning, while at school, that the charge for the education of girls was the same as that for boys, and that, when they became teachers, women received only half as much as men for their services, the injustice of this distinction was so apparent.

If our principles are right, why should we be cowards?

A child, like all other human beings, has inalienable rights.

Woman has so long been subject to the disabilities and restrictions with which her progress has been embarrassed that she has become enervated, her mind to some extent paralyzed; and like those still more degraded by personal bondage she hugs her chains.

Those who go forth ministering to the wants and necessities of their fellow beings experience a rich return, their souls being as a watered garden, and a spring that faileth not.

I want that there should be a belief, a faith in the possibility of removing mountains to the side of right. If we believe that war is wrong, as everyone must, then we ought to believe that by proper efforts on our part, it may be done away with.

There is a broad distinction between religion and theology. The one is a natural, human experience common to all well-organized minds. The other is a system of speculations about the unseen and the unknowable, which the human mind has no power to grasp or explain, and these speculations vary with every sect, age, and type of civilization. No one knows any more of what lies beyond our sphere of action than thou and I, and we know nothing.