To acquire the habit of reading is to construct for yourself a refuge from almost all the miseries of life. Almost all, I say, for I would not go so far as to pretend that to read a book will assuage the pangs of hunger or still the pain of unrequited love; but half a dozen good detective stories and a hot-water bottle will enable anyone to snap his fingers at the worst cold in the head. But who is going to acquire the habit of reading for reading's sake, if he is bidden to read books that bore him? 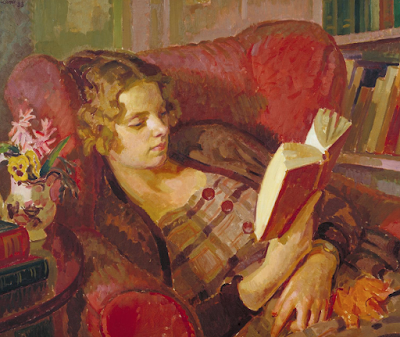 En annan läkare som inte blev vid sin patient var Somerset Maugham — nu tänker jag inte rekommendera The Moon and Sixpence", även om det vore passande, utan en kort essäsamling som handlar om böcker och läsning: "Books and you", från 1940.
Jag nickar förtjust, och mumlar instämmande efter var och varannan mening — han har så sunda åsikter, och uttrycker precis vad jag tycker! Läs bara vad du tycker om, man måste inte läsa ut en trist bok:
No one is under an obligation to read poetry or fiction or the miscellaneous literature which is classed as belles-lettres. (I wish I knew the English term for this, but I don't think there is one.) He must read them for pleasure, and who can claim that what pleases one man must necessarily please another?
Ha gärna flera böcker på gång:
For my own part, I find it more agreeable to read four or five books together. After all, you aren't in the same mood on one day as on another, nor have you the same eagerness to read a certain book at all hours of the day. We must suit ourselves in these matters, and I have naturally adopted the plan that best suits me. In the morning before I start work I read for a while a book, either of science or philosophy, that requires a fresh and attentive brain. It sets me off for the day. Later on, when my work is done and I feel at ease, but not inclined for mental exercise of a strenuous character, I read history, essays, criticism or biography; and in the evening I read a novel. Besides these, I keep on hand a volume of poetry in case I feel in the mood for that, and by my bedside I have one of those books, too rarely to be found, alas, which you can dip into at any place and stop reading with equanimity at the end of any paragraph.

Wuthering Heights is unique. It is an awkward novel to read, because sometimes it so outrages probability that you are completely bewildered; but it is passionate and profoundly moving; it has the depth and power of a great poem. To read it is not like reading a work of fiction, in which, however absorbed, you can remind yourself, if need be, that it is only a story; it is to have a shattering experience in your own life.
_ _ _
Hawthorne did not possess the gift of creating living characters; Roger Chillingworth is merely a bundle of malignancies, not a human being, and Hester is but a fine piece of statuary.

Fast när det kommer till "Krig och fred", så får jag erkänna att jag aldrig kom igenom hela boken — kanske var jag för ung med mina 12 år:
If I hesitated about War and Peace, it is because it seems to me sometimes tedious. There are too many battles narrated in too great detail, and the experiences of Pierre with Freemasonry are exceedingly dull. But all this can be skipped. It remains a great novel. It describes in epic proportions the growth and development of an entire generation.
Om det låter som jag har läst de flesta av böckerna han rekommenderar, så har jag uttryckt mig luddigt, jag är synnerligen obevandrad i den franska litteraturen, så kanske är det på tiden att jag läser Stendahl:
Stendhal wrote two novels which I would have you read; first, The Red and the Black, and then, if you like it as much as I do, The Charterhouse of Parma. For I must tell you that he is my favourite novelist. I like the plain and exact manner in which he wrote and the cool precision of his psychological analysis. He scrutinized the workings of the human heart with perspicacity.
Så slutar jag med en del lösryckta citat:

I must remind you here of something that I have already insisted upon, namely that I am very strongly of opinion that you should read for enjoyment. To my mind it is very ill-advised to look upon reading as a task; reading is a pleasure, one of the greatest that life affords, and if these books of which I am now going to speak to you do not move, interest or amuse you, there is no possible reason for you to read them.

I must also say a few words about Emily Dickinson. I am afraid that I shall offend many persons in America when I confess that to my mind she has been accorded more praise than she deserves.
Now I have but Walt Whitman to speak of. I have kept him to the end, because I think it is in Leaves of Grass that we at last get, free from European influences, the pure and unadulterated Americanism which in these pages we have sought. Leaves of Grass is a work of immense significance, but since I began by reminding you that I would recommend you to read books which, whatever their other merits, were enjoyable, I am constrained to tell you that few great poets have been more uneven than Whitman
Poe wrote the most beautiful poetry that has ever been written in America.
Though in the course of a long life I have read a great many American books—indeed I could not have been more than ten when with gales of laughter I read Artemus Ward and Helen's Babies—I cannot pretend that I have read nearly as widely as any American fond of reading will certainly have done. There is no reason why I should. I have read at random.
Next I would have you read another novel, but of a very different sort. This is Prévost's Manon Lescaut.
Finally, I must remind you that our own time has produced in Marcel Proust a novelist who can stand comparison with the greatest.
Anatole France had a small but exquisite talent, which he displayed with rare felicity in a volume of stories called The Mother-of-Pearl Case. He was at one time too highly esteemed, but the neglect which has now befallen him is unjust.
Now let us speak of another short novel, Voltaire's Candide, within whose few pages are contained more wit, more mockery, more mischievous invention, more sense and more fun, than ever man compressed in so small a space.