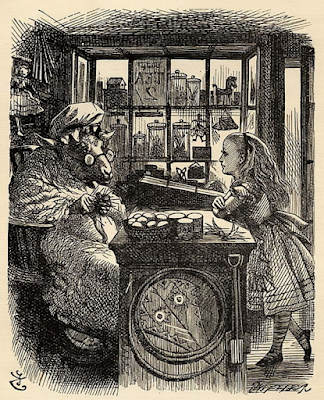 Alice and the Knitting Sheep,
illustration from 'Through the Looking Glass"

She looked at the Queen, who seemed to have suddenly wrapped herself up in wool. Alice rubbed her eyes, and looked again. She couldn’t make out what had happened at all. Was she in a shop? And was that really—was it really a sheep that was sitting on the other side of the counter? Rub as she could, she could make nothing more of it: she was in a little dark shop, leaning with her elbows on the counter, and opposite to her was an old Sheep, sitting in an arm-chair knitting, and every now and then leaving off to look at her through a great pair of spectacles.
_ _ _
‘Are you a child or a teetotum?’ the Sheep said, as she took up another pair of needles. ‘You’ll make me giddy soon, if you go on turning round like that.’ She was now working with fourteen pairs at once, and Alice couldn’t help looking at her in great astonishment.
‘How can she knit with so many?’ the puzzled child thought to herself. ‘She gets more and more like a porcupine every minute!’
‘Can you row?’ the Sheep asked, handing her a pair of knitting-needles as she spoke.
‘Yes, a little—but not on land—and not with needles—’ Alice was beginning to say, when suddenly the needles turned into oars in her hands, and she found they were in a little boat, gliding along between banks: so there was nothing for it but to do her best.
Upplagd av em kl. 15:27