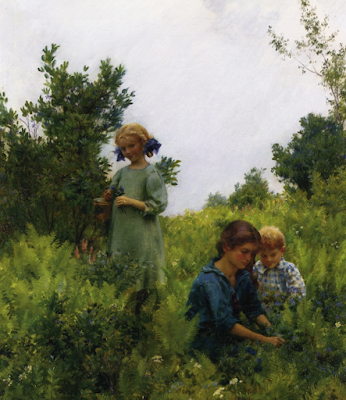 
”The blueberries are not sung in song or enshrined in romance; but I do not see why they should not be, for they are beautiful to behold; and, if eaten in their native haunts, are delicious enough as well, although, of course, not to be mentioned in the same paragraph as the strawberries. Perhaps it is because they are somewhat too lavish of themselves, in their great, heavily-hanging, plainly-seen clusters. They lack the charm of comparative rarity and exclusiveness; they need not to be eaten one by one, like the strawberries, but may be crunched together in generous mouthfuls. See how pretty they are—the dainty green of the unripe berries, the glossy pinks and scarlets of the half-ripe, the misty blue of the fully matured. To sit on this hill, steeped in languid summer sunshine, rife with odours of fir and of nameless growing things in their golden prime, with the sough of winds in the shaking tree-tops, and eat blueberries, is something that the mighty ones of earth might envy us. The poor inhabitants of palaces, how we can pity them, from this, our hill throne of the wilderness, fronting the gateways of ”the west! The afternoon is a great, dulcet, golden dream of peace, through which the heart of summer throbs with lazy rhythm.”