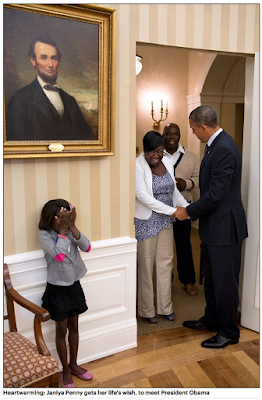 Meet Janiya Penny, the terminally ill eight-year-old whose dream came true earlier this year when she got to meet her idol, President Obama.
This heartwarming photograph shows the pair of them at the White House, Janiya so overcome with excitement and emotion that she breaks down in tears, has her hands covering her face in awed disbelief.
Mr Obama greets Janiya's beaming mother, Breale Gray, grasping her hands in both of his own with heartfelt sincerity as the young girl stands with her back pressed up against a wall.
Becoming the latest internet sensation, the inspiring image was taken by Pete Souza, a White House photographer.
Looking older than her years in a crisp grey blazer, her elbow patches matching carefully selected pumps and jewelery, and black ruffle skirt, Mr Souza's emotional image captures her true young age.
Too young, really, to be fighting so serious an illness.

The meeting was made possible by the Make-A-Wish foundation, after associates approached Janiya three years ago as she battled sickle cell anemia, a life-threatening disease that causes excruciating pain.
When she told them her dream was to meet the President they panicked, unsure they could make it happen, even trying to get her to change her wish.
But she was adamant. Obama was her hero and that was all she wanted.
Janiya first fell for the President in 2008, staying up late to watch him give his inaugural speech.
Aged just four at the time she felt the huge significance of the historical moment, Ms Gray told the Huffington Post and still remembers what she was wearing on election day - her Obama t-shirt.
It is that shirt, she insists, that helped him to win the presidency.
But lucky mascot or not Janiya's chances of meeting her hero seemed slim, until on August 8 2012 when she finally got her wish.
Flanked by her mother, brother and grandfather, Janiya cautiously crossed the threshold into the presidential manor.
All four were in or close to tears, overwhelmed with the magical once-in-a-lifetime experience that they had been granted.
They were given a tour of the grounds, showered with gifts, and treated like VIPs as photographers snapped them at every angle with Mr Obama.
'He gave her a signed book of the Constitution, that says 'Best Wishes Janiya, Dream Big' and special buttons and tokens,' Ms Gray said.
More importantly, though, 'He signed my "J" hat and gave me a bag of M&M' Janiya said.
It's certainly a day she'll never forget.
7 oktober 2012
Upplagd av em kl. 06:11